At the beginning of October Europe’s chief fire protection experts, organised in the EGOLF association met at the MPA NRW for their annual meeting. 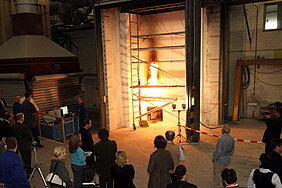 At the beginning of October Europe’s chief fire protection experts, organised in the EGOLF association met at the MPA NRW for their annual meeting.

The conference, organised by EGOLF (European Group of Organisations for Fire Testing, Inspection and Certification) was able to reach further steps to harmonise the European fire protection regulations. The association founded in 1988 has decisively advanced the European agreement for testing the fire behaviour of building materials or building components. Thus central trade barriers among the countries of the EU could be eliminated: In the meantime many test methods have been uniformly regulated as well as their evaluation and application.

The graduate engineer Henrick Rademacher who as head of the department is in charge of the fire testing centre Erwitte in the MPA NRW was delighted about the important guests: “By meeting in our company EGOLF has appreciated the technically excellent work of our fire protection experts who have been assisting in the development of uniform European standards for many years.”

Altogether 59 experts from 28 countries attended the EGOLF meeting that took place in Dortmund and in the fire testing centre in Erwitte. There they could witness a fire test where the thermal attack on the exterior wall of a building was simulated by flames.